In May 2015, King Long officially released its new bus model XMQ6119 at Beijing Bus & Truck Expo, which won the Best Intercity Bus Title of the Year. Together with other four bus models which were upgraded, XMQ6119 raised eyebrows of many visitors during the expo. 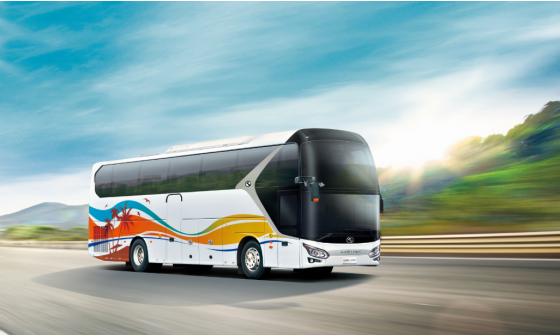 Despite the exponential growth of China’s high-speed railways and air-transportation market, King Long XMQ6119 has already sold for more than 1,000 units, an impressive achievement. In some coastal cities in Guangdong, Jiangsu and Zhejiang Provinces, the vehicle is particularly popular among bus operators.

Thanks to its streamlined appearance and aerodynamically optimized body structure, XMQ6119 is able to cut fuel consumption by 0.5-1 liter. Xie Jing, a bus operator from Xi’an says that he bought his first bus from King Long in 2002. So far, 70% of his bus fleet are branded with King Long. Zhu Fenghua, General Manager of Hangzhou Qiran Business Travel Co., Ltd. adds that his company first bought XMQ6119FY, which significantly improved its transportation capacity and service level. Nowadays, its choice of XMQ6119 is aimed at further projecting a well-recognizable image among its passengers.

What are the secrets of XMQ6119? According to the bus maker, the vehicle successfully cuts its weight by over 500 kg, which has significantly improved its economy. In addition, by a redesign of the layouts of passenger seats, passengers are endowed with more travel comforts. Another highlight of the vehicle is its unparalleled safety standards.